Mount Kenya is home to approximately 2,500 African elephants, along with countless more that migrate annually to the green lush slopes of the mountain in the drier seasons, using the Mt Kenya Elephant Corridor. Numbers within the elephant populations in the Mountain Conservation Area consist of the Mt Kenya sub-population, estimated at 2,500 elephants by Vanleeuwe, in 2020, the Aberdares sub-population estimated at approx. 3,570 elephants by Vanleeuwe 2017 and a total of 8,021 elephants in the Laikipia-Samburu-Meru-Marsabit ecosystem.

COVID-19 economic restrictions have hit the mountain just like other areas of the world. With a reduction in tourism income along with poor job opportunities for local communities, many have turned to the forest for subsistence. Due to the ongoing pandemic, with economic hardships being felt throughout the mountain communities, more large mammal snares and pits are being found by our ranger teams on mobile patrols, again indicating an increasing pressure on the mountain’s wildlife.

In June 2020, one elephant was electrocuted from a fence line that was connected to mains power in the north-east area of Mt Kenya. These incidents offer grave threats to people and wildlife, and only through regular patrols and community engagement and sensitization can we reduce the incidents.

The most important results of the 2020 survey was that illegal threats increased by 51% per cent since 2016. There may well be a link between the larger spread of elephants and larger spread of illegal activities in 2020 (compared to 2016). Illegal logging multiplied 3.5-fold and livestock numbers increased by 75 per cent. Meat poaching was found to be more spread and in the same areas where logging increased. Elephant distribution was more spread than in the same season in 2016 which may indicate some competition for grazing with livestock. Livestock negatively affects the mountains carrying capacity to sustain its wildlife grazers.

The Trust deploys four community ranger teams to work closely with the Kenya Wildlife Service (KWS), the government’s wildlife agency, to reduce poaching and forest destruction on the mountain. They face harsh terrain, high altitudes and challenging weather conditions on a daily basis to protect Mt Kenya’s ecosystem. They man their bases year-round and carry out long patrols to support KWS in combating illegal extraction of wildlife, timber and charcoal from the forest and moorland.

The ranger teams remove traps and snares set for poaching and bushmeat, making arrests and apprehending those illegally in the forest logging hardwood or clear-cutting to grow marijuana. They are regularly involved in firefighting with the KWS, Kenya Forest Service and local communities – fires that can wipe out vast tracts of forest if not controlled. Despite risking their lives when encountering poachers or injured wildlife, none of our men are armed. They sometimes request to be supported by armed KWS rangers.

This year, with support from the IUCN Save our Species, cofounded by the European Union the Joint Wildlife Protection Team, which has patrolled Mt Kenya since 2008, deterring and decreasing illegal activities, preventing poaching and working with local people to increase awareness of the importance of protecting the mountain ecosystem have been supported in their work through patrol, equipment and resource support.

The team is led by Edwin Kinyanjui, a highly experienced mountain ranger, who is a KWS Honorary Warden and the recipient of a Disney Conservation Hero Award.

Having a dedicated vehicle and driver, the team can be sent at a moment’s notice to high risk areas. They participate in wildlife research and crime training, community education and reforestation. They are leading on a new camphor seedling project to restore this over-harvested species. Earlier this year, they supported a comprehensive elephant survey. The success of the team is due to the strong collaboration and trust between KWS and MKT, which has enabled a team of civilians to work alongside armed rangers for over a decade.

Benefits of the work to the local community include the following: 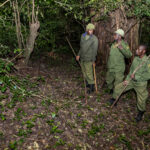 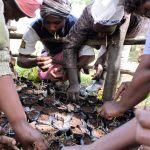 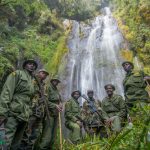